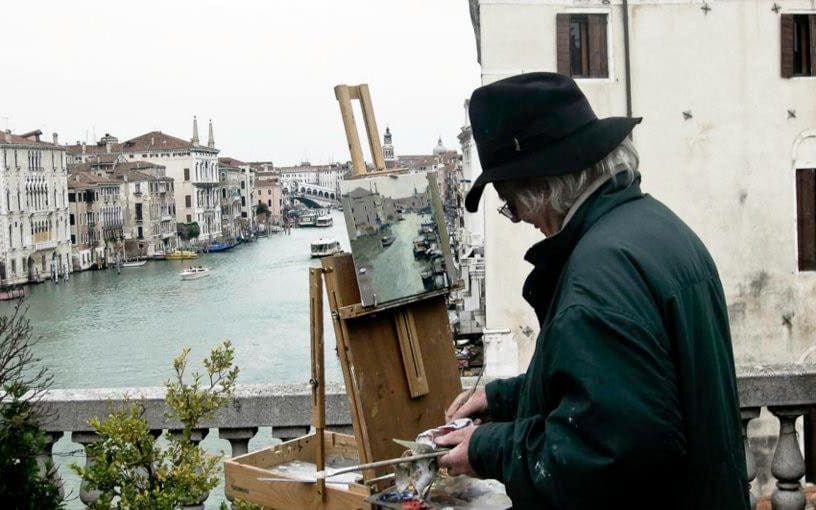 Continuing our series showcasing masterpieces from the permanent collection of the RWA is ‘La Giudecca, Winter Morning’ by painter Ken Howard.

Ken Howard needs little introduction. OBE RA, elected ARA in 1983, Honorary Member of the Royal Society of British Artists in 1988, Royal Academician in 1991 and President of the New English Art Club from 1998 to 2003. He was elected an academician of the Royal West of England Academy in 1981 and has won countless awards.

“I was painting properly from the age of seven and could draw and paint before I could write.”

As a traditional oil painter associated with British post war giants like Hockney, Freud and Bacon, Howards only failing, according to some critics, is that his work is too optimistic or saccharine. He paints beautiful landscapes with great optimism. Other recurrent themes include studio interiors, life models and the urban landscapes of London. Without the overt publicity of some of his contemporaries, his fifty year career has been built on steadfast popularity from amateur collectors, “I’ve probably got more pictures on people’s walls than any other painter living today.”

‘La Giudecca: Winter Morning,’ was purchased at the ‘Seven Academician’s’ exhibition in 1995 and is more subtle than his usual picturesque scenes – in my view, that is the charm of the painting. The composition is clearly defined by the sky, canal and foreground, the diagonal of the pavement drawing the eye along the walkway to the vaporetto stop, as if you are right there, standing with the artist. Although the sky is overcast with clouds, the morning sunshine is emerging – there is always light in  Ken Howard painting. Highlights and reflections, subtle flecks dance across the canvas describing movement and the energy of daily life slowly waking up. Suggestive figures gather at the vaporetto to catch the morning boat to work, a fishing boat glides past.

“All my life, my inspiration has been drawn from light, whether the silver grey of winter or the sparkle of summer.”

La Giudecca is the slip of island overlooking the main attractions of San Marco and beyond. Tourists often neglect to visit its many treasures and for this reason it retains a peace and stillness hard to find in Venice. The painting captures this illusive calm with a coolness in the air, sun rising. His palette is gentle and soothing – nothing is jarring, even the artificial yellow of the Actv vaporetto sign that obscures the church of San Giorgio Maggiore beyond. The use of soft violet, greys, complimentary yellows and golds across the whole canvas creates a pleasing cohesion. Howard admired the many tones of grey that Velasquez mastered and has often imitated his palette. The painting itself, oil on board, is quite small at 24.5cm by 19cm and could be a plein air sketch to work up into a larger painting later.

Howard has a studio in Venice, perhaps on the Giudecca, which he bought when he met his Italian wife Dora. He has been painting the city since the 1980’s and loves it for the magical light and majestic architecture, “It is the only place I know where one can stand on the spot and see a composition at every turn.”

In an interview with researcher Rachel Boyd Hall for Ken Howard: A painter’s journey in 2016, Howard discusses the importance of selecting the optimum hours for painting and time of year to visit;

“Light is my main motivation and if I see contre-jour, which makes the water sparkle, I want to paint it. In the middle of the day the sun is directly overhead which means everything is tonally flattened – you must have contrast. Whistler said Venice is a winter city – it’s beautiful at all times of the year – the best time is May or September. When you leave, you always want to go back. I’ve been over fifty times and never get bored.”

The optimism of the artist reflected in his work is intentional. He completed National Service with the Royal Marines from 1953 – 55 and spent years working alongside the British Army as the official war artist in Northern Ireland between 73 – 78. He was asked to draw with realism took many risks to deliver on the brief, “I didn’t take photos, that was much too dangerous, I just sat down and drew in some very hairy places.” As a result of his military experiences, he returns to the landscapes that he loves and paints them with hopefulness. His sister married a Cornishman and his parents bought a house in Mousehole which he subsequently inherited,

“The fish markets of Newlyn and Venice are quite similar. Both share a particular red – Venetian curtains and the fish boxes in Newlyn. Cornwall is the closest to Italy in terms of light and water.”

Howard talks about the three sentiments he intends to convey through his paintings – revelation, communication and celebration, “I want art to raise me above suffering – I want it to celebrate life.” Howard is routinely drawn to landscapes that have a personal resonance – Venice, Cornwall and London. I have lived in Venice, holidayed in Mousehole where I briefly met the artist, and studied in London. My father served in the British Army – with these links and a deep affinity to these places, I feel closer to the artist in appreciating his commitment to his craft and to life,

“It is through light that I want to celebrate my world.”

If you would like me to write a feature, review or artist interview like this one, please get in touch here.

Please go to the Instagram Feed settings page to create a feed.