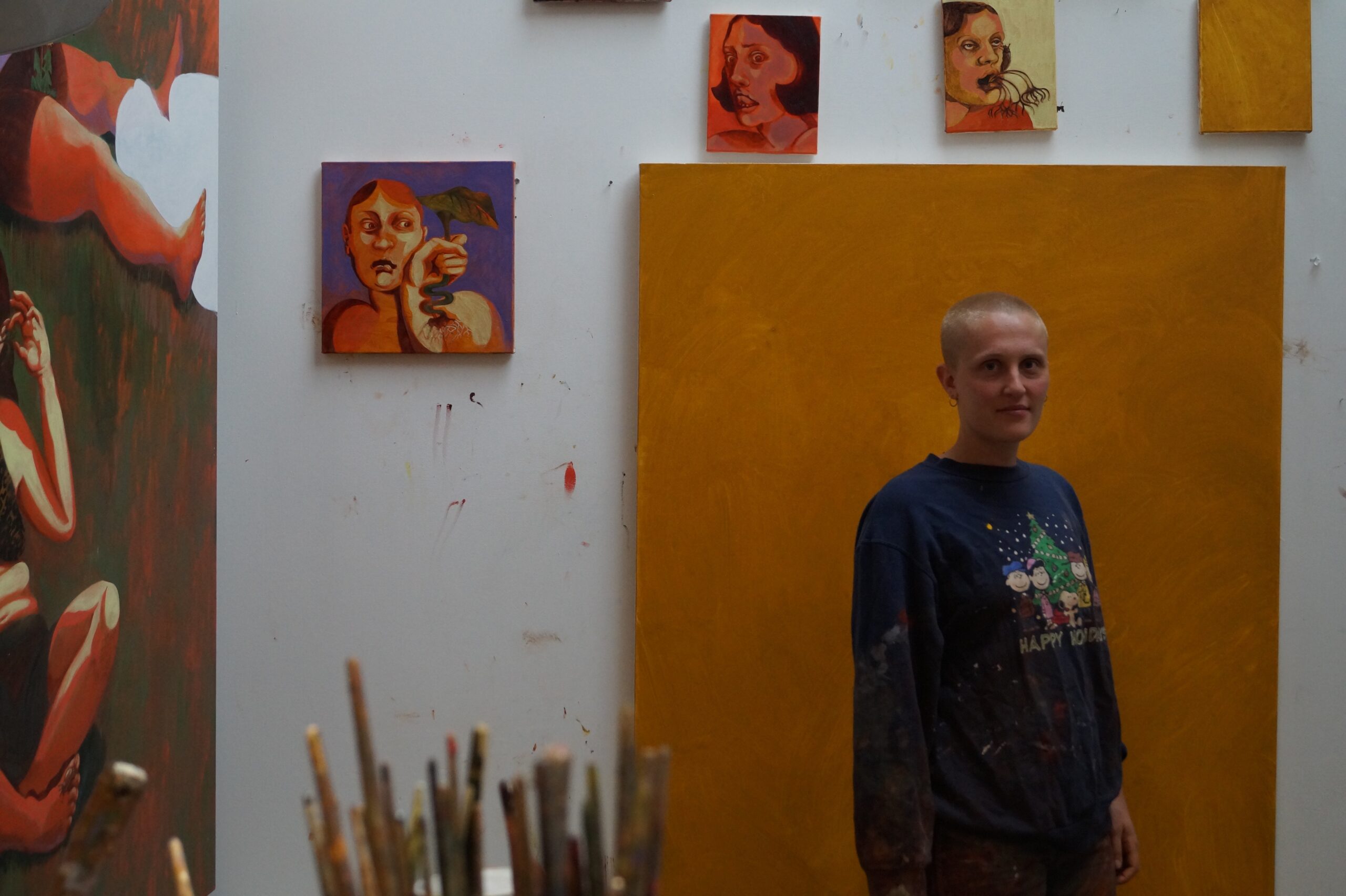 “Have you heard the Roman myth about Daphne…. who turns into a bay tree?”

It’s a good opener and leads us into a discussion about Monty Don, mental health and green fingers. Nettle Grellier is happy to be back in Stroud, based at SVA, after a studio stint in Redruth. Lockdown and personal circumstances have meant a return to the town where she grew up, a place where she can slip straight back into the artist community. ‘Every single person on my street is an artist.’

Back to Daphne, from whom Nettle is currently taking inspiration, “She was being chased by Apollo who wouldn’t leave her alone, so she called on Mother Earth for protection, who turned her into a laurel tree.” Sure enough, many of her latest works include branches, weeds and leaves sprouting or being pulled from orifices and growing through toes.

It’s a definite shift away from her recent series ‘Easy Peelers’ and ‘Poisson chez moi’ more intimate, figurative paintings. Painted in response to her world, faces have taken on a pained expression, eyes glare. It’s clear that the uncertainty of world events are being translated onto the canvas, shared in a candid Instagram message, Nettle writes “This is the closest depiction of how it feels that I can make.”

“These paintings shouldn’t be here,” she explains. Under normal circumstances they would have been shipped off to the Delphian gallery as part of an exhibition called ‘Common Ground’. Mentally, she has moved on from many of them, but they are still here – it’s a particularly pertinent symbol for the current crisis where everything is in limbo and no-one can move forward.

I am more familiar with the other paintings hanging around her studio, as I have been following her progress on Instagram and have come to love her hot, neon orange and purple figurative work. There is so much heat and energy coming off these walls, I’m transfixed. We stand closely beneath a large diptych entitled ‘Baby baby bye bye’ and she explains that the canvas is grounded with a mixture of cadmium red, permanent orange and yellow ochre. which peaks through from beneath the figures. Above my head hangs ‘End Times’ a political piece exploring climate crisis and Conservative toxicity.

I suggest that these paintings could become her ‘signature style’ which she instantly rejects, “repeating a format is lazy,” although it’s a painting style that has received great acclaim and has been snapped up by highly regarded galleries in the past few years.

Personally I’m a big fan of the figures set against backgrounds of hot pink and terracotta tones – to me, they are reminiscent of the flattened nudes and stylised faces of Picasso. I’m drawn to the femininity and closeness of the bodies, dirty feet, holding hands, accents of checked cloth, pomegranates, oranges, picnics and bumblebees.

But don’t be taken in, “I don’t want my paintings to be too….nice,” Nettle insists and repeats a few times during the course of our meeting. Thinking about it later, as I wander away from her studio, I consider that the sentiment might also be reflected in the artist herself. She’s nice, yes, but also smart and strong and quietly ambitious. Pretty with her shaven head, “It’s so freeing.” Political and quirky too, quick witted, generous in her chattiness but also decisive in her views.

I get the feeling she is living an experimental life, sticking close to her ideals of social justice. Pretty paintings are given coarse titles such as ‘Sweaty’ and ‘Clammy’ – it’s an interesting combination.

The ‘huggy paintings’ as she describes them, were born out of an adventure, travelling around Southern Spain in an enormous green removal lorry for the best part of five years, culminating in a year-long residency programme devised by Nettle and her boyfriend in Granada. Almost accidentally, they invited students and graduates to live with them on a remote farm and paint. It became an affordable residency for early career artists called Los Artistas del Cortijo – many stayed for months at a time, formed friendships and learnt from each other in so many ways. Nettle is proud of this achievement and would like to recreate it again somehow, acknowledging that it was a special set of circumstances that brought them all together.

The topography of the dry hills of Granada accounts for the Mediterranean-African heat and colour radiating from the paintings. The limited colour palette is intentional, bringing a lightness to the work. The intertwined legs, arms and bodies illustrate a real need at that time to find closeness with others, having travelled as a solitary pair for so long. Nettle explores physical intimacy, purposefully painting groups of friends who are at ease in each others company.

Nettle was always going to be an artist. If pushed, the only other career choice she could consider is becoming a dog trainer. She comes from a family of artists and creatives and so ‘simply joined the family business,’ which didn’t seem scary at all because she knew the nuts and bolts of it. And there’s absolutely no sign of coasting, only advancing with a steely determination.

Nettle is currently taking part in the Turps Banana correspondence course, an artist led programme devised by a group of YBA’s to offer unbiased support and advice to emerging artists. She tells me that the feedback and mentor support has been invaluable. I can sense Nettle’s ambition, seemingly unfazed about networking and collaborating in group shows, seeking out and securing press coverage, confidently navigating the industry.

Beyond this she would like to embark on a Masters degree and continue developing as an artist. “What does success look like to you?” I ask. Her answer is refreshingly direct, “Being able to paint every day and make a living. I’m at the stage where I’m still saying yes to everything. I guess becoming an established artist might mean saying no and being more selective.”

Her daily practice is disciplined and impressive following a fairly strict 9am – 6pm routine, “routine is important to me,” underpinning her professional day. She doesn’t dream about her paintings, but often wakes up and heads straight back to where she left off. One thing she is very clear about is painting at night doesn’t work for her, neither does painting and drinking, definitely not.

Apart from the fluorescent pinks, oranges and earth tones, Nettle is partial to Kings Blue Deep and Michael Harding paints in particular. She’s keen to share her secret tip with Good on Paper readers about bulk buying paint from Ebay or from the discount shelf in Jacksons Art, “Why not, let them in on it!”

Another initiative she is keen to promote is the #artistsupportpledge led by Matthew Burrows, currently followed by 54.4K on Instagram ‘A movement, a generous culture and a dynamic economy open to all artists and makers anywhere in the world.’ She’s thrilled to have been able to buy paintings from other artists whom she admires as a collector herself.

If you want to snap up a Nettle Grellier piece, now is your chance as she is selling drawings from her Instagram page via #artistsupportpledge for £100 each. A percentage of her sales are shared amongst charities that are important to her including The Outside Project, an LGBTIQ + Shelter and Community Centre COVID 19 Hotel and Refuge Fund. There will also be the chance to buy a limited edition print on sale through Unit London Gallery later in the year. There’s no doubt her talent and commitment will be a winning combination as she moves into the next phase of her career. I’ll be watching from the sidelines.

Where can you see Nettle’s work?

All details of Nettle’s forthcoming exhibitions can be found on her website www.nettlegrellier.com and Instagram page @nettlegrellierartist

Make a private appointment to view paintings in her studio in Stroud by emailing nettlegrellier@hotmail.com

Exhibitions postponed due to COVID 19 include:

If yo would like to commission some creative copywriting, please get in touch with me here.